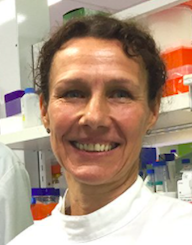 AITHM PhD candidate Doris Pierce is implementing a world-first human trial into the use of hookworm infection to prevent the development of metabolic syndrome (MetS) and Type 2 diabetes mellitus (T2DM).

The three-year Phase 1b clinical trial, which commenced in early 2018, aims to establish the safety and tolerability of controlled, low-dose infection with the human hookworm, Necator americanus (Na), but also its potentially beneficial effects on metabolic, immune and physical health, as well as the bacteria than inhabit our gut, aka the microbiome.

“Metabolic diseases including MetS and T2DM are characterised by whole-body pro-inflammatory immune responses and dysregulation of the gut microbiome, which, in turn, plays a detrimental role in metabolic health, including immune activity,” said Ms Pierce, who is based at the AITHM Centre for Molecular Therapeutics.

Recent studies, mostly in mice, have suggested that parasitic worm infection may protect against MetS and T2DM. Evidence from a recent systematic review and meta-analysis on the effect of worm infections on metabolic outcomes and deworming studies in humans also support the suggestion that worm infections play a protective role against metabolic disease. Worm infections induce an anti-inflammatory response in their host, potentially through modulation of the microbiome, which is associated with improved blood glucose control and metabolism.

Successful efforts to eradicate parasitic worms in developed countries are now being linked to increases in inflammatory and metabolic diseases, including T2DM.

The AITHM trial aims to recruit 45 participants from Cairns and Townsville, aged between 18 and 50 with central obesity (abdominal fat which poses particularly high risks) and/or additional signs of MetS. Fourteen participants have already completed 12 months of the trial with another 18 coming up to the six-month mark.

Participants are inoculated with either 20 or 40 worm larvae, or a placebo (diluted Tabasco sauce). The microscopic larvae, suspended in a few drops of water, are administered via a dressing pad applied to the forearm of participants. The larvae quickly infiltrate the skin and then travel to the small intestine, where they attach to the intestinal wall.

Unlike tape worms, which can grow up to several metres and have been used as a weight-loss aid, because they consume food ingested by their host, the hookworms feed on miniscule amounts of blood and grow to no more than 1cm.

To ensure safety, all participants undergo regular clinical health checks and blood pathology screening. Body fat composition is recorded, and blood and faecal samples are collected for analysis of immune responses and gut microbiome composition changes. Researchers are particularly keen to see if the worm therapy reduces insulin resistance – a key factor in the development of T2DM.

After two years, participants will be offered a de-worming medication to remove the hookworms. They can then elect to stay in the trial for an additional 12 months to investigate if deworming reverses worm-induced health changes.

Ms Pierce acknowledges that a good diet, a healthy lifestyle and plenty of exercise remain the best current preventative treatment for MetS and T2DM.

“While live worm inoculation therapy may not sound too appealing for the wider community of people at risk of Type 2 diabetes”, Ms Pierce continues,  “this AITHM trial is generating crucial proof-of-principle data that could facilitate the identification of purified hookworm molecules or probiotic bacteria with the potential to create complementary therapies to help prevent inflammatory and metabolic diseases”.