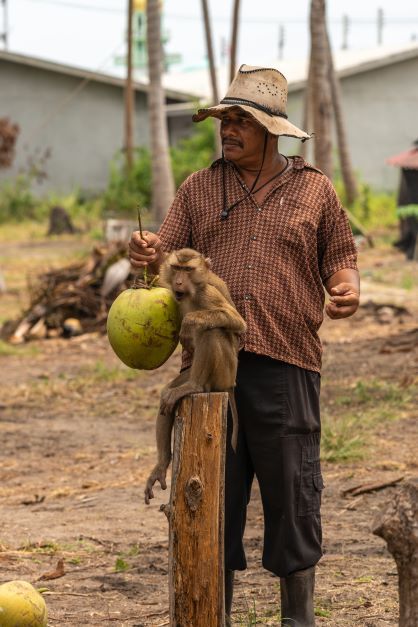 Mosquito experts from the Australian Institute of Tropical Health and Medicine are partnering with Indonesian and other Australian researchers to evaluate an emerging disease in monkey-to-human transmission of malaria parasites across Indonesia, as zoonotic diseases such as COVID-19 increase in frequency and severity.

The project has brought together molecular, social and agricultural scientists, entomologists, epidemiologists, ecologists, clinicians, and mathematical modellers to both strengthen human surveillance systems and facilitate sustainable agricultural development in the context of rapidly changing environments and infection risks.

Professor Tom Burkot from AITHM at JCU, said multidisciplinary approaches to emerging zoonotic infections are increasingly recognised as the most effective way to understand their complex transmission dynamics.

Professor Burkot and Dr Tanya Russell are leading the study of the mosquitoes responsible for transmission of the parasite that causes malaria in humans, known as Plasmodium knowlesi, to better understand the factors that influence its transmission, including the influence of land-use change and environment.

Habitat alteration is one of the main causes of so-called “spillover” events, for example, deforestation and urbanisation, reduce the habitats of many wild species and increase the possibility of human contact.

Professor Burkot said P. knowlesi was an emerging malaria parasite found in the long-tailed (Macaca fasicularis) monkey and pigtailed macaques (M. nemestrina), and is transmitted by the Anopheles leucosphyrus group of mosquitoes.

“An increasing number of infections have been seen in Indonesia as the parasites spillover from the monkey hosts to human populations,” Prof Burkot said.

Dr Tanya Russell said the parasite had not yet evolved the ability for human-to-human transmission (via a mosquito) without the parasites cycling back to the monkey populations but it may only be a matter of time until P. knowlesi, or monkey malaria emerges as a human malaria.

“Like many emerging infectious diseases, the primary drivers thought to be increasing the transmission rates between hosts, includes changing land use patterns, which are related to agricultural development and deforestation,” Dr Russell said.

“This program will enable us to accurately identify monkey malaria cases and evaluate current malaria prevention activities for high risk groups such as rural farmers in the context of zoonotic transmission.”