After the flood … researchers pool expertise 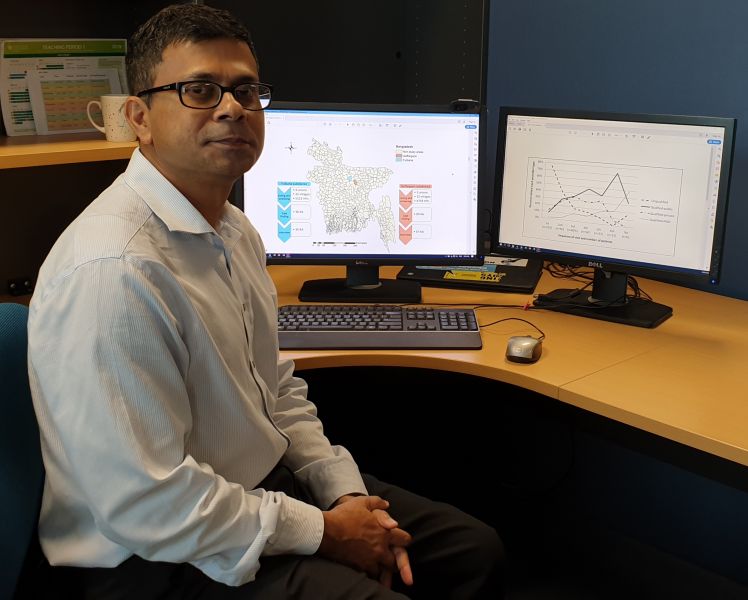 AITHM member, Dr Kazi Rahman, joined forces with two colleagues to plot the immediate risk of mosquito-borne diseases in the Townsville region, in the wake of devastating floods early this year.

The epidemiologist worked with AITHM applied mathematician, Dr Adeshina Adekunle and biostatistician, Dr Oyelola Adegboye, to predict the threat of disease outbreaks, including dengue and Ross River virus, within 90 days of the flood event, which peaked in the first week of February.

“We had to work quickly to release our results within that period, but it gave us a good feeling to be doing something that was directly related to the community where we live,” Dr Rahman said. “We published in April.”

Mathematical modelling and a literature review of post-flood disease outbreak studies in other parts of the world, including Dr Rahman’s birthplace, Bangladesh, led the trio to predict an increase in mosquito-borne diseases in the short term, but they were happy to be proved wrong.

However, the short-term AITHM research project did raise questions that have yet to be answered.

“Animals such as kangaroos and wallabies are the main transmitters of Ross River virus. Primarily, female Aedes vigilax and Culex annulirostris mosquitoes bite and infect the animals, then other mosquitoes become infected when they feed on upon the same animals. These mosquitoes may then transfer the disease to humans,” Dr Rahman said.

“We don’t know what happened to these animals during and after the flood. Did they move further away from human habitats or closer?”

It is also unknown what longer-term impact the flood will have on mosquito populations in the Townsville region. While heavy rainfall may have initially flushed out mosquito breeding sites, they could have returned as flooding subsided. And any mosquito eggs laid during that period may remain dormant for some time, according to Dr Rahman.

“Studies have shown that for many of these mosquitoes, the eggs can survive dry seasons – without access to any water at all – then hatch later, when it rains again,” he said. “Even inundations caused by king tides could trigger hatching in some areas.”

Dr Rahman believes it is important to investigate how the effects of the Townsville floods may influence the occurrence of mosquito-borne diseases in the coming months.

“I think it is necessary to continue monitoring the situation – not over just three months, but over a year or more,” he said.

“This will generate evidence that people will be able to use in the future, if something similar happens. Information that can help communities prepare for the consequences of major flooding events.”

He relished the opportunity to collaborate with other AITHM members on the Townsville floods project.

“We come from different backgrounds. We have different expertise. But we worked together as a team and complemented each other’s skills. It was very fruitful. We have become good friends, as well,” he said.

“There is also great collaboration between JCU and AITHM in terms of teaching. Leading AITHM researchers share their experience and expertise through guest lectures with different colleges and disciplines of JCU.”

Several months after completing the Townsville mosquito-borne diseases project, Dr Rahman swapped his role as a JCU lecturer in medicine for the position of senior epidemiologist with New South Wales Health’s North Coast Public Health Unit, based in Lismore. However, he is keen to maintain his ties to AITHM.

“I am very much interested in continuing my collaboration with AITHM, in order to progress my research,” he said. “Being based in northern NSW, I am looking forward to developing a north-north collaboration, especially around diseases and health consequences of natural events that are common in both the regions.”