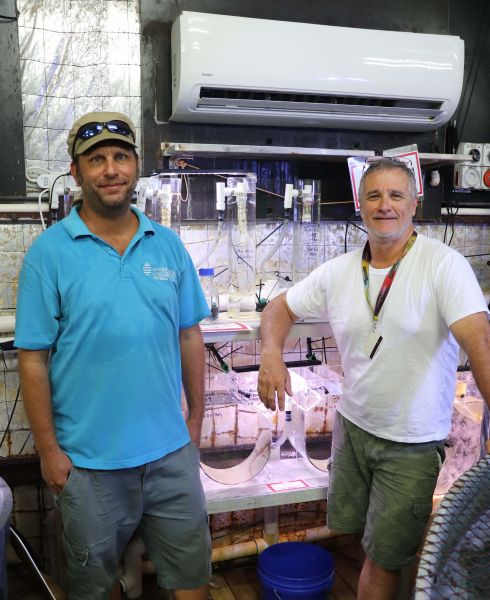 In a world-first, renowned venomous jellyfish expert Professor Jamie Seymour and his team of researchers at AITHM have managed to breed the extremely venomous species of box jellyfish, the Irukandji Carukia barnesi, in captivity.

At just the size of a thumbnail, the Irukandji jellyfish is the smallest and also one of the most venomous species of box jellyfish in the world, with stings so severe that they can cause fatal brain haemorrhages.

Although previously successful in collecting Irukandji adults and getting them to spawn, getting the eggs to hatch required a finely tuned approach to the handling of the Irukandji’s polyp phase, and a healthy dose of perseverance.

“I spent my PhD looking into the thermal and osmotic tolerance of the polyp stage of the Irukandji, which provided new insights into the polyp’s habitat suitability. Combinations of temperature, salinity and feeding frequency were all studied as cues for getting the polyps to reproduce asexually or what is termed ‘budding’,” said senior researcher Dr Robert Courtney.

“Another critical factor was to extend the observation period of the development and hatching timeframes of the eggs. What we found is that the eggs of the Irukandji jellyfish can enter a dormant phase and take up to six months to hatch.”

The ability to now breed Irukandji eggs in captivity allows for an expansion of research to take place which could include developing an early forecast system for expected locations and breakouts of the species.

“Being able to breed Irukandji in captivity will enable us find the answers to questions like how long they live for, how fast they grow, and what their environmental thresholds of temperature and salinity are. All of this information will allow us to better predict when and where Irukandji are most likely to occur, which then has the potential to save lives,” said Professor Seymour.

Although an anti-venom for the intensely painful Irukandji sting is not on the immediate horizon, due in part to having at least eight different Irukandji species in Australia alone, more research into their venom will hopefully uncover new and effective treatments for the infamously painful sting and symptoms, known as Irukandji Syndrome.

“The breeding of large numbers of the Irukandji jellyfish in captivity will give us the large volumes of venom that we need for this type of research to take place,” said Professor Seymour. “By studying the venom, we can also investigate what novel compounds from the venom could possibly be developed for other therapeutics.”

“In regard to the Irukandji venom, one of the things you see typically is an increase in people’s blood pressure after they have been stung. And we think this comes about because of an increase in the stimulation of adrenaline in your body. So we may be able to pull out from the Irukandji venom the compound that causes adrenaline spikes. This could lead to a new therapeutic compound being developed for people who need adrenaline, such as in the event of a heart attack.”