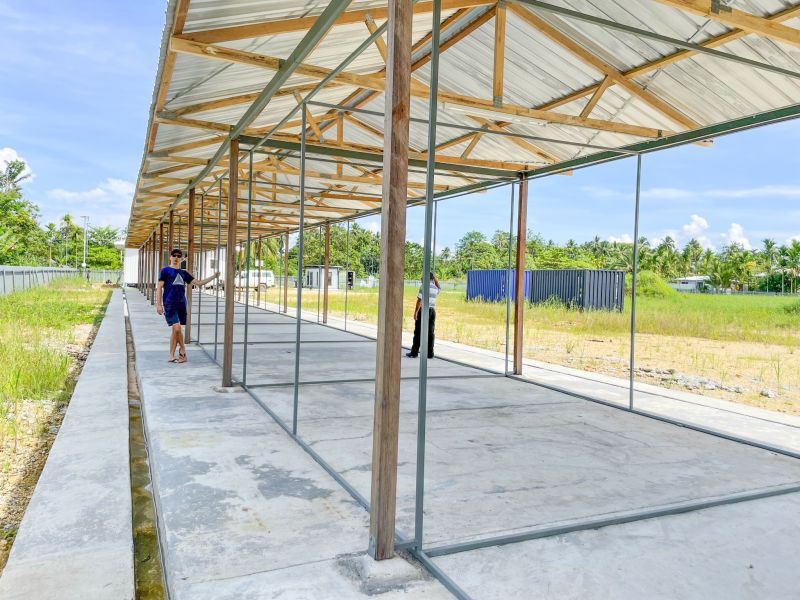 Papua New Guinea (PNG) has the highest burden of malaria in the Western Pacific region, with 1.5 million malaria cases (in a population of under 10 million) that claim 3000 lives annually. Long-lasting insecticidal nets, currently the only vector control tool implemented nationwide to control mosquito-borne disease, cannot protect residents from mosquito species that bite outdoors and/or during daylight hours. New tools are needed to expand the malaria “safety net.”

An AITHM co-led $6.8m vector-control evaluation and capacity building program – created through long-term partnerships between Australian and PNG researchers, health authorities and local communities involved in key research trials – will welcome the launch of the first stage of a new vector control testing facility in Madang, later this year.

Funded through the Indo-Pacific Centre for Health Security, the Innovative Vector Control Consortium, and the PNG Institute of Medical Research (PNGIMR), the facility will provide crucial analytical support for the Newly Adapted Tools Network Against mosquito borne disease Transmission (NATNAT) program, which began field-based trials in four villages on the north coast of PNG in 2021.

The NATNAT program is led by researchers from the Burnet Institute in Melbourne, PNGIMR and James Cook University, with strong links to the PNG National Malaria Control Program.

The Madang facility will include a new insectary (a secure space to rear mosquitoes for test purposes), and a 50-metre by 4-metre tunnel cage – unique in the South Pacific region – which will provide a platform for researchers to study the impact of a range of existing and novel vector control tools on local mosquitoes.

“We need to evaluate how these different tools work with mosquitoes in PNG settings – including the effectiveness of residual sprays applied to common household building materials here, such as bamboo and woven sago palm,” said Dr Karl, who has been researching malaria in PNG for 15 years and is laboratory head of the entomology section at the PNGIMR.

The distribution costs of new vector control tools must also be considered. Currently, bed nets (issued free to PNG residents mainly by the Global Fund) cost around US $2 per net, but delivery to remote PNG villages can triple that figure. “Where there are no roads, the nets need to be carried to villages by people, sometimes trekking for several days, or flown in by helicopter,” said Dr Karl.

While the technology is important, the NATNAT program is equally invested in people. It has established partnerships with PNG stakeholders at all levels, from PNGIMR, the National Department of Health and National Malaria Control Program through to provincial health authorities and village communities which play a crucial role in translating NATNAT research findings into practice.

NATNAT includes a sub-project devoted to canvassing stakeholder views on vector control, their experiences and concerns, to gauge levels of acceptance for current and novel vector control activities, as well as encourage the co-creation of alternatives. The consultation process includes extensive survey work undertaken at national, provincial and community levels.

“That is important to us, because you don't get anywhere if you try to dictate something from the top,” said Dr Karl.

Four villages (a total of 641 households) are currently participating in an indoor residual insecticide spraying trial. About 600 residents have volunteered to provide monthly blood samples to NATNAT researchers to help determine whether this vector control tool is influencing malaria transmission rates.

In October 2021, NATNAT co-organised a master trainer’s course together with the PNG National Department of Health to start building capacity for key stakeholders to plan and implement indoor residual insecticide spraying programs in their own regions. NATNAT is now assisting the National Malaria Control Program to conduct a larger-scale pilot trial in New Ireland Province.

“NATNAT is now working on a number of fronts to facilitate the rapid assessment and adoption of new vector control tools for PNG,” said Dr Karl.