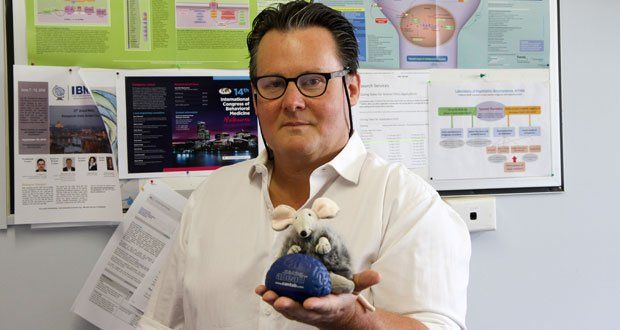 A James Cook University research team led by , Professor Zoltan Sarnyai, has identified that changes to gut bacteria, triggered by a high fat, very low carbohydrate diet, may have the potential to reverse symptoms of schizophrenia.

The results prompted the JCU Professor of Pharmacology to investigate whether ketogenic diet-induced changes to gut microbiota (micro-organisms that live in the digestive tract) might play a role in the dramatic results.

His latest – yet to be published – trial results strongly indicate that the diet has a direct effect on gut bacteria and that this impact is linked to restored brain function. Mice with schizophrenia-like behaviours, on a normal diet, showed similar levels of behavioural improvement, when subsequently fed faecal (poo) microbiota from their counterparts on the ketogenic diet.

“The results are really exciting,” observed Professor Sarnyai, who heads the Laboratory of Psychiatric Neuroscience affiliated with AITHM.

“We now have strong data that is helping to galvanise this whole field of research, looking at the link between gut microbiota, brain function and the treatment of major psychiatric disorders.”

His findings are supported by Chinese and United States research published in the prestigious Scientific Report in early 2019, which found that when faecal material from human schizophrenia patients was fed to healthy mice, they too developed schizophrenia-like symptoms.

Professor Sarnyai teaches pharmacology to medical but is the first to acknowledge that drugs currently used to treat major psychiatric disorders, including schizophrenia and bipolar disorder, have limited benefits and severe side effects.

He has a strong interest in the emerging field of nutritional and became intrigued by the ketogenic diet in 2014, after reading about its international reputation as a dietary aid for epilepsy patients.

At the same time, he observed growing scientific evidence that schizophrenia patients may have impaired ability to convert glucose (sugars) into energy to feed normal brain activity. Fatty acids, prominent in the ketogenic diet, provide an alternative energy source that circumvents this problem.

However, the strict demands of the diet make life-long adherence a major challenge. Professor Sarnyai said the latest research findings had fuelled the hunt to identify key chemical components within the diet that could be more easily delivered to schizophrenia sufferers – which number more than 21 million , including some 200,000 in Australia.

He is working with PhD student, Ann-Katrin Kraeuter, fellow JCU collaborators and research partners in Brazil and Ireland, to detect and analyse the molecular biology of micro-organisms in the gut – and trace their ability to influence the machinations of the brain.

“We want to isolate the active ingredients of the ketogenic diet that produce this beneficial result, to develop either a dietary supplement or a drug that people can take, while remaining on a normal diet. I think that is the final goal of our research,” he said.

NOTE: Findings are in the process of being published. Jounral details will be provided when made publically available.