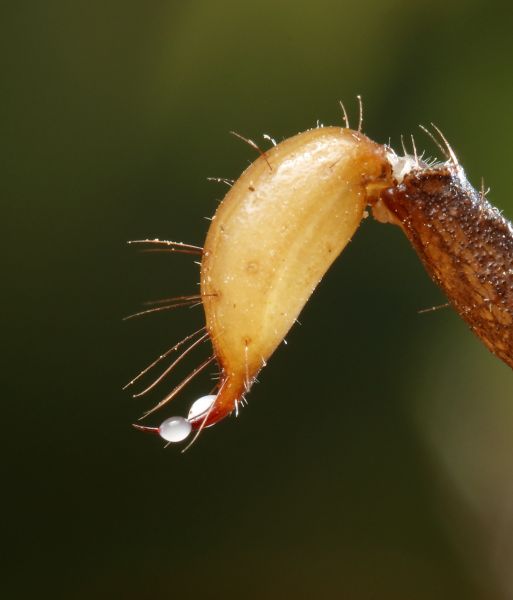 Diabetes is the fastest growing chronic condition in Australia, responsible for more than 4,400 amputations per year, mainly to remove potentially fatal diabetic foot ulcers. Brain cancer survival rates are low. Some 1,700 new cases are diagnosed annually in this country.

Two unlikely heroes, a parasite and a scorpion, produce tiny amounts of biological molecules with therapeutic components which can help treat these diseases. The challenge? To distil these components and craft smaller molecules that can be easily reproduced in the lab and deliver optimal results.

For JCU PhD researcher, molecular cell biologist, Dr Mohadeseh Dastpeyman, less means more. Seeking to unlock the therapeutic potential of a parasite protein and a scorpion peptide, she explored the structure-function relationships of these molecules – to identify the minimum three-dimensional structure each requires for bioactivity.

The protein, Ov-GRN-1, is being developed into a potent, new wound-healing treatment for diabetic foot ulcers, while the peptide, chlorotoxin, shows promise as a tumour imaging agent to facilitate precise surgical removal of brain tumours.

Both are in limited supply in the natural world. Ov-GRN-1 is released by an Asian parasite called Opisthorchis viverrine, while chlorotoxin is derived from the venom of Leiurus quinquestriatus

The wound-healing potential of Ov-GRN-1 was discovered by a JCU research team led by immunonoparisitolgist, Professor Alex Loukas. But it is a large protein, difficult to reproduce in sufficient quantities in the lab for research purposes. They turned to another JCU team, headed by structural biologist, Professor Norelle Daly, to provide a solution. Dr Dastpeyman joined her team to help take on the challenge.

Utilising a range of cutting-edge biophysical and biochemical techniques, the team was able to whittle away the non-bioactive parts of the protein and reduce it to one quarter of its original size. Dr Dastpeyman then continued to look at different versions of the downsized protein to optimise its production and bioactivity.

“Now we have a protein that is more potent in terms of inducing cell growth and wound-healing, as well as more cost and time-effective to produce,” she said.

The intellectual property related to the wound healing peptides has recently been licensed to a small biotech company in the United States.

Professor Daly’s team also harvests and analyses toxins produced by venomous animals, including scorpions. During their research, they look for bioactive properties in peptides, which could yield new drug leads.

Chorotoxin is one such peptide. It selectively binds to tumour cells and, when combined with a fluorescent tag, can potentially help surgeons to accurately pinpoint the location and margins of a brain tumour during surgery.

Employing biochemical approaches, along with a range of cell-based assays, Dr Dastpeyman identified the region of chlorotoxin that is responsible for binding to cancer cells. This finding is likely to facilitate the peptide’s development as a therapeutic treatment.

She derives “absolute satisfaction” from the knowledge that her PhD research is helping to pave the way for new therapeutic drug treatments.

“Biology is the language of medicine,” she said. “I want to devote my skills as a biologist to develop new medicines to combat highly distressing diseases such as diabetes and cancer to contribute in improving quality of human life. That is what motivates me every day,” she said.

Her research has generated four peer-reviewed publications, including two papers in the prestigious Journal of Medicinal Chemistry. She has also received several bursaries and travel awards to present her research at key national conferences, including an oral presentation at the 12th Australian Peptide Conference.