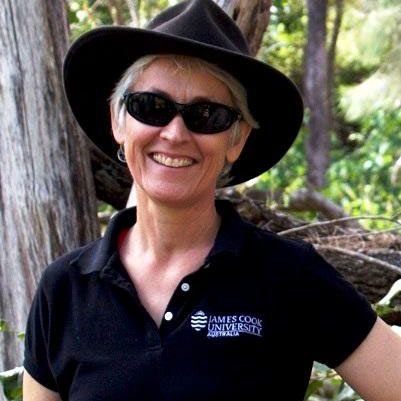 Top researchers investigating a group of viruses that triggers haemorrhaging in fish, reptiles and amphibians recently met at JCU to share their insights into this global threat to both wild and captive animal health.

The fifth international symposium of the Global Ranavirus Consortium (GRC), hosted by the university on 4-6 June, attracted more than 30 experts from seven different countries. JCU Associate Professor Ellen Ariel, a virologist, is a founding member of the consortium, established in 2011 to foster collaborative research into ranaviruses.

The large double-stranded DNA viruses are transmitted through water or when an animal eats infected prey. Ranaviral disease, which causes internal bleeding that can prove fatal, has already had a major impact on frog populations in England. Susceptibility to the disease varies between species. Barramundi, an iconic Australian seafood, is highly vulnerable.

“Some fish species manage to shrug off the infection, but barramundi are extremely susceptible and die within a week,” observed Professor Ariel.

Australia is at the forefront of ranavirus research.

“JCU Professor Rick Speare, an Australian public health physician and veterinary surgeon, was behind the first isolation of an Australian ranavirus strain, in ornate burrowing frogs, in the late 1980s. He named it Bohle iridovirus, after the Townsville suburb where he found the infected tadpoles,” said Professor Ariel, whose own PhD research into ranaviruses was inspired by the late Professor Speare.

As ranaviruses thrive in higher temperatures, climate change is now raising the incidence of disease outbreaks, along with pollution, which weakens the ability of animals to fight infection.

“It is very situational. If you have other stresses that impede the immune system, such as exposure to pesticides, then the virus wins the battle,” said Professor Ariel.

Trade in pet animals – both national and international – also contributes to the spread of ranaviruses.

“The best way to spread disease is always through live animals. If we don’t move animals around, that helps prevent disease from spreading,” said Professor Ariel.

While fish diseases attract the attention of both the aquaculture and recreational fishing sectors, and threats to charismatic frogs also arouse concern, little is known about the impact of ranaviruses on reptiles, particularly in a country the size of Australia.

One of Professor Ariel’s PhD students, Alicia Maclaine, has just completed a study involving the survey of multiple species of wild and captive lizards in Australia.

“She found evidence of ranaviruses in small pockets, in both pristine and urban areas,” said Professor Ariel. “Moving beyond a laboratory exercise and finding it in the wild has immense significance. It is a step towards discovering what this means to nature.”

The research findings will be published and shared with the 200 members of the GRC, which includes virologists, ecologists, molecular scientists and immunologists, as well as those with a professional interest in biosecurity and evolutionary history.

“Australian researchers have a lot to offer. But we've got a lot to learn from other people, as well. We will continue to undertake more collaborative research and spin off each other’s work,” said Professor Ariel.

The consortium has already produced a book on its research findings to date, Ranaviruses: Lethal Pathogens of Ectothermic Vertebrates, as well as numerous scientific publications.