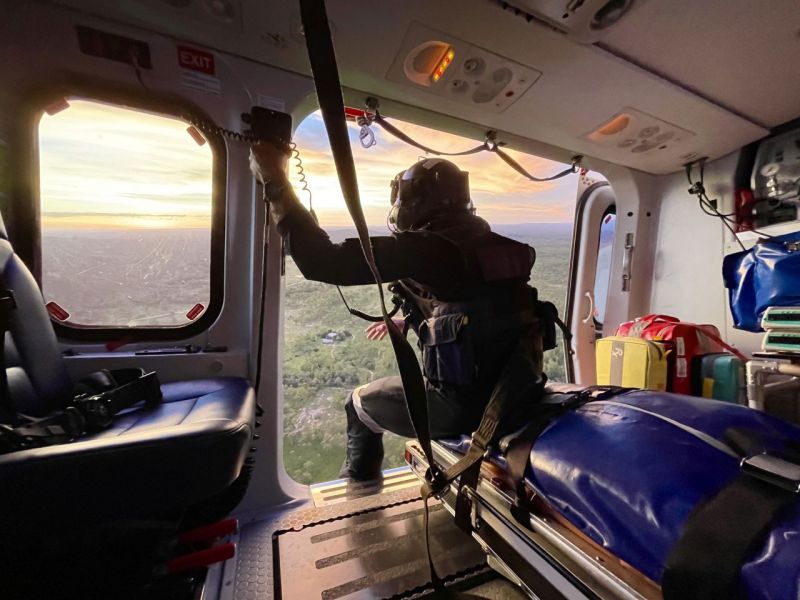 Rural and remote residents in North Queensland are two to three times more likely to suffer severe injury than city dwellers, due in part to higher accident rates, as well as elevated levels of self-harm, particularly in Indigenous communities. They are also five times more likely to die from their injuries.

Skewed trauma statistics, incorrect patient data and lack of evidence-based treatment guidelines are reinforcing inequities in emergency trauma care between rural and remote residents of North Queensland and their urban counterparts, according to a ground-breaking JCU study, Trauma Care in the Tropics.

To gain an accurate picture of the incidence and severity of cases in North Queensland, JCU joined forces with Retrieval Services Queensland, LifeFlight Retrieval Medicine, the Royal Flying Doctor Service, and five hospital health services in the region, to trace the journey of 2300 major trauma patients, aged nine weeks to 99 years, who were airlifted to hospital between 2016 and 2018.

Data collected during this initial phase of the study is the first step towards identifying patients requiring aeromedical transport and how pre-hospital treatment guidelines can be optimized to increase chances of survival – in a region that presents a unique combination of challenges for both the patient and the aeromedical team, which performs at least two retrievals each day, often involving round trips of up to 2200 kms.

“North Queensland aeromedical services cover an area almost the size of New South Wales and Victoria combined, at times battling dangerous terrain and/or hazardous tropical weather conditions to retrieve patients. Transport to hospital can take up to 12 hours – and every hour delay, after an injury occurs, increases the risk of complications and death.”

Dr Letson is a member of the university’s Heart and Trauma Research Laboratory, led by Professor Geoffrey Dobson, which has been lending its expertise in pre-hospital trauma care to the United States Department of Defense for more than a decade, and is now turning its sights closer to home.

Her first task – to collect data on major trauma cases and patient outcomes in North Queensland – revealed virtually none existed.

“This means that the current clinical picture is skewed, because most trauma patients in North Queensland are not included in the statistics,” said Dr Letson. “The median times for patient transfers to hospital in Queensland are based on patients usually within 15 minutes of a hospital in the south-east corner – which is completely irrelevant to our region.

“Mixing data from metropolitan cities with that of regional and rural hospitals and health centres will continue to mask ongoing issues relating to remoteness; making it harder for aeromedical services to argue the case for more resources.”

She found the availability of medical resources varied a great deal during retrievals, as did patient treatment methods. In addition, inaccuracies in patient data were often accrued during emergency journeys involving transfer between multiple health service providers – miscoded information as basic as the sex of the patient and their date of birth – which would hinder follow-up research of patient outcomes.

Urban-centric guidelines for treating trauma patients in transit to hospitals are also often irrelevant in the North, as they are generally based on the “scoop and run” principle, which assumes a hospital is only minutes away.

“There’s often an assumption that treatment begins when a patient reaches hospital, but that is just not appropriate in North Queensland. Knowing how much transport time affects outcome, we need to be starting treatment in a pre-hospital environment,” said Dr Letson. “It’s all about providing continuum of care from the point of injury to hospital admission.”

The detailed clinical history of those 2300 major trauma patients – from initial emergency call to the Queensland Ambulance Service through to case notes on treatment administered during aeromedical flights, and subsequent hospital admissions records – will be well utilised during the next stages of the study.

Future goals include identifying prehospital treatment methods which are achieving the best patient health outcomes – reduced ICU stays, in-hospital complications and death rates – and other opportunities to upskill emergency care staff, both on the ground and in the air.

“It’s challenging to provide emergency care in rural and remote areas of North Queensland, but Australia is a developed country. I think we can do better by our residents,” she observed. “Where you live should not matter.”