Tackling the breach in immune defences to TB 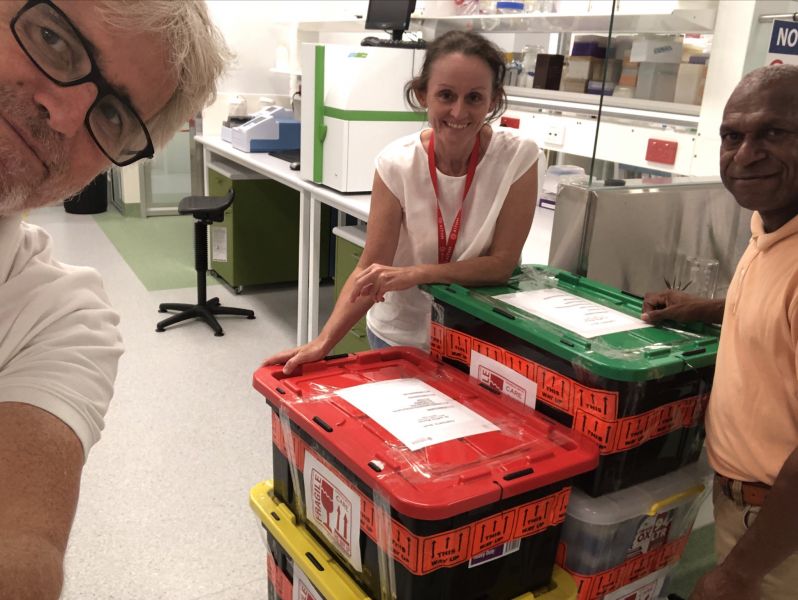 JCU immunologist, Associate Professor Cathy Rush, is seeking to discover what is disabling the immune defences of a rural community in Papua New Guinea, and how this weakness is contributing to unprecedented rates of tuberculosis in the region.

She is working with JCU microbiologist, Associate Professor Jeff Warner, to trace the causes of the major TB epidemic in Balimo, in PNG’s Western Province, and identify risk factors that could be addressed to reduce the burden of this disease on the beleaguered community.

The research team includes other JCU researchers and their students, as well as experts from PNG and the Townsville University Hospital.

Analysis of blood samples volunteered by more than 450 members of the community, which suffers almost double the PNG average of TB cases per year, has revealed widespread immune system deficiencies.

“Even among people in the general community who do not have TB, their immune systems are just not working as well as they should be. We need to find out what is going wrong with their immune cells, how that is predisposing them to TB, and are there ways to intervene. Children, in particular, are highly susceptible to the disease,” said A/Professor Rush, who works with the AITHM Centre for Molecular Therapeutics.

As pulmonary TB attacks the lungs, her research also focuses on obtaining sputum (phlegm) samples from community members and conducting immune cell analysis of the sputum to identify parallels between the blood and sputum results.

“Sputum is lung material. If you have too many or not enough of certain types of white blood cells in your sputum, you are more likely to have a compromised or defective immune system. That information can help us determine which people might be more susceptible to TB,” observed A/Professor Rush.

She and A/Professor Warner are also conducting “big picture” research to identify risk factors which may be jeopardising the immune strength of Balimo residents and the health of their lungs.

Patients with HIV or diabetes are more susceptible to TB. But neither disease is prevalent in the region. Unlike other parts of PNG, including the capital, Port Moresby, which are experiencing a diabetes epidemic due to the impacts of a Western diet.

Balimo residents still consume mainly fresh-caught fish and home-grown vegetables. Although researchers are not ruling out diabetes as a risk factor, they are interested in understanding what other risk factors these are people may be experiencing.

Parasites, including gastrointestinal hookworms, roundworms and protozoa (single-celled organisms), are also known to increase vulnerability to TB. The JCU researchers hope to explore this risk factor in Balimo.

With the assistance of a $35,000 HOT NORTH grant, they are currently studying another recognised threat to lung health – exposure to smoke. Balimo residents traditionally cook their food on indoor wood fires.

“One of the World Health Organisation sustainable development goals is the adoption of clean fuel, including cooking fuel. We are looking to find any relationship between people that spend much of their time cooking indoors and their susceptibility to TB,” said A/Professor Rush.

“We are particularly interested in the correlations between lung immune cells and the function of the lungs. In a recent trip to Balimo, participants had spirometry tests to assess their lung function. We are now in the process of deciphering the relationships between immune cells, lung function and the likelihood that someone will get TB or more severe forms of TB.”

Having spent much of her career immersed in laboratory-based work, the immunologist is now relishing the opportunity to venture into the field and develop relationships with a community which is already benefiting directly from her research efforts.

“With our diagnostic work, the results are fed straight back to the health workers in Balimo, so they can follow up people who require treatment,” she said. “Going forward, we hope to be able to identify people with poor lung function, who need to be monitored.”

“The Balimo community is very motivated. We have whole families volunteering their assistance, which is wonderful. We are extremely grateful for their continued participation in our work,” said A/Professor Rush.

“The results of this work will contribute to making this community more resilient to the TB epidemic as we work towards eradiation of this deadly disease.”