Tackling the wave of dementia in Aboriginal communities 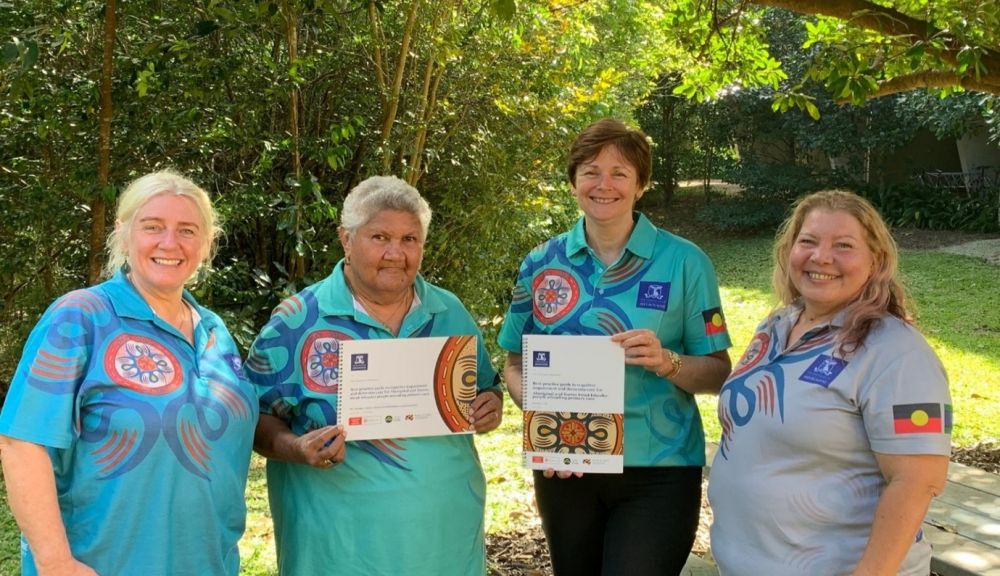 Studies across Australia have shown that rates of dementia are three to five times higher in Aboriginal communities than wider populations. They have also revealed that Aboriginal Community Controlled Health Organisations – often located in rural and remote locations – are ill-equipped to diagnose and treat dementia.

In an Australian first, JCU and universities in three other states have joined forces to deliver a training program designed to assist Aboriginal Community Controlled Health Organisations (ACCHOs) to better identify and manage the healthcare of the growing number of people with dementia in their communities, some as young as 45.

The team is working on the ground with the three Queensland ACCHOs participating in the project: Mamu, in Innisfail, Cairns-based Wuchopperen, and Gidgee Healing, based in Mount Isa.

Project teams from three universities: University of Sydney, Melbourne University and the University of Western Australia – all regular project collaborators with HART – are working with the other nine participating ACCHOS, including one in the Kimberley region.

“Queensland projects often focus on the south-east corner. We wanted to ensure that we were working with those most in need; rural and remote communities who really struggle to access geriatric care and services,” said Dr Russell.

Let’s CHAT Dementia is employing a range of tools to upskill ACCHO staff and also educate the communities which they serve.

At an Australia-wide level, the project has already facilitated the introduction of additional questions, regarding memory and dementia, to the Medicare Benefits Scheme-funded annual adult health check which ACCHOs offer to all clients over the age of 55.

In May 2022, the project also released a best practice guide to assist clinicians to identify clients with cognitive impairment and dementia symptoms and adopt the most appropriate care measures. Freely available to all Aboriginal health services, the guide has been endorsed by a range of peak bodies, including the National Aboriginal Community Controlled Health Organisation, the leadership body for Aboriginal and Torres Strait Islander Health.

On the ground, the project’s regional team managers, including Mrs Quigley and A/Professor Russell, conduct six-monthly clinical record audits for each participating ACCHO in their state. The medical records for 150 clients, aged 45 and above, are randomly sampled for each audit, seeking to identify clients with dementia risk factors and those already displaying signs of the disease, then ascertain what has been done to date to assess and treat these clients.

The ACCHOs are provided with feedback following every audit and clients who warrant further clinical investigations are referred for a comprehensive assessment.

Over the course of the project, Let’s CHAT Dementia has also delivered a series of six workshops to staff at each ACCHO, spanning a range of topics from dementia risk factors through to evidence-based, best practice models of care for people with dementia, the wellbeing of their carers, and end-of-life care. Individual workshops have also been provided for GPs.

In addition, each ACCHO has a designated “age champion”; a staff member with a keen interest in aging and dementia, who acts as a liaison between the project researchers and the health service.

“There is still that stigma around getting dementia,” said A/Professor Russell. “Some fear that it is related to payback or that dementia is just a normal part of aging – which it’s not. It’s a disease of the brain. Early detection and intervention can positively impact the health and wellbeing of people with dementia and their carers.”

COVID-19 has placed major obstacles in the path of the project. While it has not curtailed the activities of the Queensland team, project members in Western Australia and Victoria have been forced to deliver workshops via telehealth and webinar. But there is a silver lining. This challenge prompted Let’s CHAT Dementia to record a series of webinars with Dementia Training Australia, which can now be freely accessed by healthcare providers.

The project, due to conclude in May 2023, has proved a highly rewarding experience for the Queensland team.

“Seeing that we've been able to improve clinical care to older Aboriginal adults and access to a geriatric assessment has been very rewarding from a clinical perspective,” said Mrs Quigley.

“Providing education that will enable clients with dementia to be managed by a Country-appropriate health service, on Country, is obviously going to be immensely valuable and precious to people,” said A/Professor Russell.