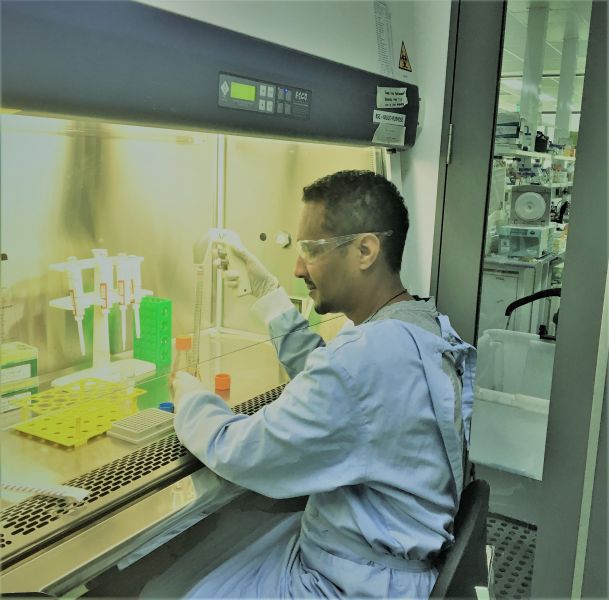 JCU PhD researcher, Bemnet Tedla, has identified promising new drug targets in a parasite which causes schistosomiasis, a disease which claims up to 200,000 lives globally each year.

While investigating specific enzymes (biological molecules) crucial to the survival of the parasitic worm species Schistosoma mansoni, he discovered three with similar functions. Previous enzyme-targeting drugs have focused on eliminating one, unaware of the other two.

“They assumed the parasite contained only one of these enzymes, known as cholinesterase enzymes, which regulate the parasite’s nervous system,” said Dr Tedla, a molecular biologist and parasitologist based at the Centre for Molecular Therapeutics.

“I identified and characterised three enzymes with similar actions. When one enzyme was eliminated by a drug, the other two compensated for the loss. These findings could be used to help develop new drug targets.”

The World Health Organisation estimates at least 220.8 million people required treatment for schistosomiasis in 2017. An acute and chronic disease caused by parasitic worms known as blood flukes, it is prevalent in tropical and subtropical regions, particularly Africa. Communities which lack access to clean drinking water and adequate sanitation are most vulnerable.

The parasite larvae, released by freshwater snails, penetrate human skin during contact with contaminated water. Adult parasites, which live in blood vessels, release eggs that enter waterways via human faeces and urine. The eggs hatch into larvae and infiltrate water snails, before passing back to humans. The snail species which act as intermediate hosts for the parasite do not occur in Australia.

Five species of blood fluke, which gravitate to different parts of the human body, are mainly responsible for the two major forms of schistosomiasis – intestinal and urogenital.

Schistosoma mansoni dwells in the human hepatic portal circulation system, a group of veins that carry blood from the capillaries of the stomach, intestine, spleen and pancreas to the liver. The parasite can trigger abdominal pain and diarrhoea, and result in liver enlargement, as well as hypertension (high blood pressure) in abdominal blood vessels.

There is currently only one drug, Praziquantel, recommended to treat schistosomiasis.

“But when there is only a single drug on the market, there is a risk that drug resistance will develop,” said Dr Tedla.

He used a range of cutting-edge technologies to explore the possibility that one or more enzymes within the parasite could hold the key to developing alternative drug targets to treat the disease. These methods included bioinformatics (to study the genetic sequence of the enzymes), as well as molecular, immunological and RNA interference techniques (which use the gene's own DNA sequence to turn it off).

The research journey was not easy. “There is no smooth ride in the scientific world. It's a roller coaster,” observed Dr Tedla.

But the results have been worth it. He hopes his findings will ultimately benefit millions of people living in countries struggling to deal with the health and economic consequences of schistosomiasis.

Apart from alleviating the human toll of the disease, his research may also inform the development of drugs to treat infected livestock, a mainstay of many economies in developing countries.

“Some parasites affecting animals in the agricultural sector share similar characteristics with those affecting humans. It is possible that the intervention strategies we are working on could be used to treat disease in animals, as well,” he said.