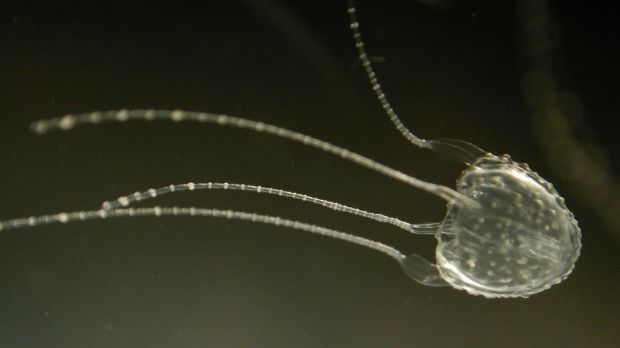 Many people living in Australia’s north know how to avoid injury from dangerous animals in the water: stay out of estuaries and waterways, and watch your step around rock pools, for example. We know which areas are frequented by crocodiles and sharks and as a result, we know how to avoid them. Until recently, the same could not be said of the Irukandji jellyfish, Carukia barnesi a creature whose sting has put more than 50 people in hospital with Irukandji syndrome during the 2018-2019 stinger season in Queensland.

AITHM’s Dr Robert Courtney, working in the team of Associate Professor Jamie Seymour, is one of very few people in the world who have witnessed first-hand the complete and complicated lifecycle of the Irukandji jellyfish: Carukia barnesi, which was named after a local well known doctor in Cairns. Dr Courtney has been observing and analysing the behaviour and life cycle of hundreds of Irukandji jellyfish in a tank that houses one of only two populations of the creatures.

The tank mimics ocean conditions and has allowed Dr Courtney to uncover surprising information about the creature, and to debunk popular theories about their distribution as part of his recently completed PhD study.

“I firmly believe that if you understand the ecology and behaviour of an animal that is dangerous, you can make better decisions about how to avoid the animal,” Dr Courtney said. “If you’ve never seen the whole life cycle of the animal, you can never really know how to manage its effects.”

The team produced the original polyp culture of Carukia barnesi in captivity, and has subsequently distributed it to collaborators such as Professor Kylie Pitt at Griffith University. After more than a decade of research by the team, they have uncovered and described the life cycle of Carukia barnesi, having found the appropriate water conditions, substrates, salinity, water flows and other factors needed to move from one stage to another of the life cycle. Dr Courtney is now using the information to better understand the Irukandji stinger season.

He said two of his key discoveries relate to the likely distribution of the polyps (or juvenile stage) and the fishing abilities of the mature jellyfish. Dr Courtney said he had found that Irukandji polyps, which live on hard substrate such as rocks, thrive in water that is far less salty and much cooler than the open ocean. This suggests that the breeding ground for these animals is not places like coral reefs as previously thought, but possibly around ‘wonky holes’, which are believed to be the outlets of springs that carry fresh water via submarine channels to the seabed. Dr Courtney said another interesting discovery he made while observing Irukandji in the tanks is the deliberateness of their fishing techniques.

“We had thought these animals were swimming around haphazardly collecting prey but the opposite was happening.

These animals were extending and twitching their tentacles in the water and attracting very specific sizes and species of little fish. We have a jellyfish that is essentially jigging for fish with its tentacles, mimicking something else, and small fish are seeing this as a food source and getting a face-full of venom,” said Dr Courtney.

All of the results that Dr Courtney has found are being used in the development of a computer model that would allow the prediction of the timing and length of the Irukandji season but also the numbers of animals present in the water, all aimed at making the ocean a safer place for people to enjoy.