Unlocking the power of venom 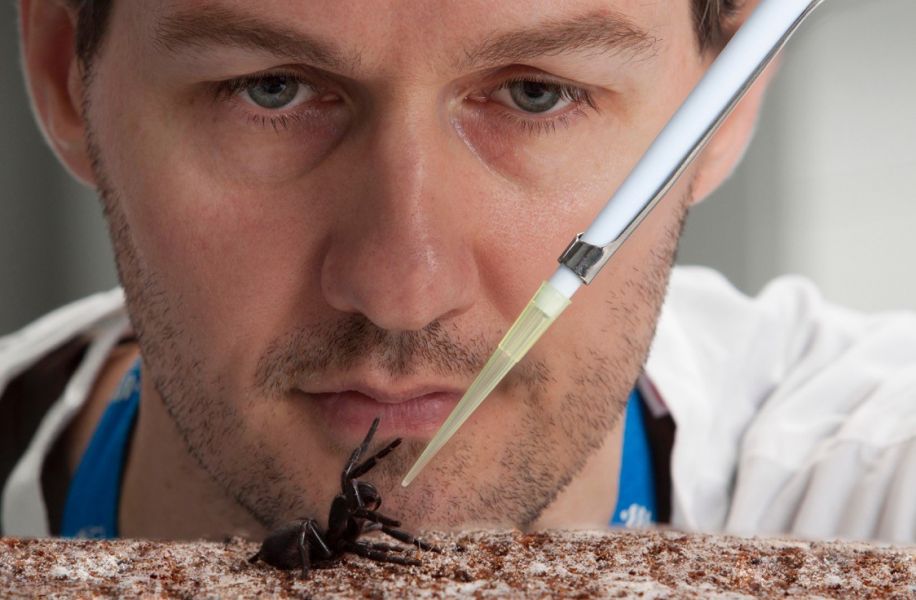 AITHM structural biologist, Professor Norelle Daly and biochemist, Dr David Wilson have been bitten by the same bug – the desire to expand knowledge of Australia’s venomous animals, including their potential to yield new life-saving drugs.

Based in Cairns, they are on the frontline of venom research; collecting animals, then harvesting and analysing the potent toxins they produce. With the help of citizen scientists, research students and commercial collectors, they have filled their laboratory with an array of venomous native species, including spiders, cone snails and scorpions, which are milked to supply samples for state-of-the-art analysis.

The quantity of venom required for analysis depends on the type of information the researchers are seeking. “Fingerprinting” – the separation of venom components to obtain mass information on a particular species – requires as little as one micro-litre. The isolation and investigation of individual venom components demand bigger samples.

“We hope to contribute to knowledge on the composition of venoms, including their bioactivities, to provide insight into designing novel drug leads,” Professor Daly said. “We are particularly interested in characterizing novel bioactive peptides (protein fragments with potential biological activity).”

Venom peptides have been heralded as a promising source of drug candidates to treat a range of conditions, including cancer. Chlorotoxin, a peptide found in scorpion venom, has been trialled as a cancer imaging agent, based on its selective binding to tumour cells.

Venom research can also assist anti-venom production, and the development of more effective treatments for people who have been bitten or stung. Athena Andreosso, a PhD student in Professor Daly’s structural biology research group, is investigating the key components of lethal Australian box jellyfish venom in order to improve emergency care for victims.

The recent purchase of a $600,000 mass spectrometer is enabling the AITHM team to obtain more information with less material. They can now sequence peptides within toxins and explore their activity. Peptide sequencing data produced by the mass spectrometer is enabling researchers to quickly zero-in on compounds which demonstrate similar activities. Combined with NMR (nuclear magnetic resonance) spectroscopy, it is also assisting Professor Daly to develop three-dimensional structures of peptides – which can then be manipulated.

“Sometimes peptides may not be as stable as we want them to be (they may degrade quickly) so we make changes to improve stability, then look at what effect that has on the structure,” she said. “If there is not much venom material available for structural or bioactivity studies, we may also want to synthesize the peptide, to create more.”