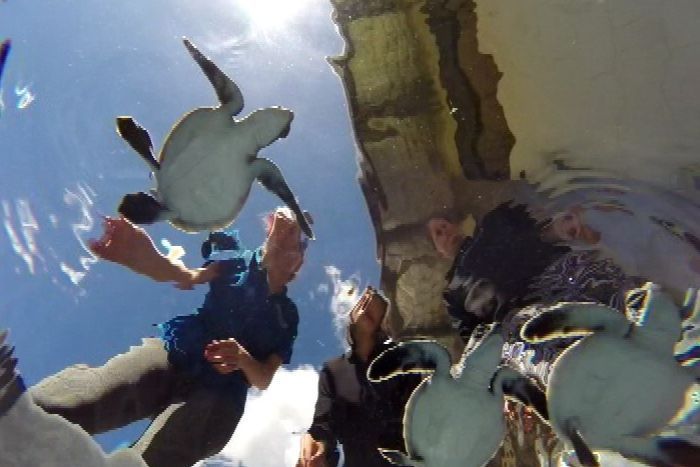 Build it and they will come. Since AITHM member, Associate Professor Ellen Ariel, launched the world’s first turtle health research facility at JCU, she has attracted a legion of students, colleagues and volunteers now helping to generate ground-breaking studies.

Established in 2017, the Caraplace research facility in Townsville was conceived in response to a mystery; why stranded turtles undergoing rehabilitation still died, despite the best efforts of carers, after Cyclone Yasi decimated their seagrass feeding grounds in 2011.

“It was really hard; there was a group of very compassionate people involved in looking after these turtles. We realised that we actually knew very little about turtle health. We needed to start from scratch and establish base lines for health, in order to identify and properly treat sick turtles,” said Professor Ariel.

The virologist and leader of the turtle health research group currently has eight PhD students investigating turtle health issues. Four are due to complete their studies this year. There is a queue of students, world-wide, hoping to take their place. JCU colleagues are also ready and able to contribute to research.

“We have clinical pathologists, pharmacologists, physiologists, bacteriologists and others who are all really good about coming on board, each with their own talents, when we ask for help. Turtle research may not be their core business, but they get involved. It’s wonderful to have all that health expertise in one place,” said Professor Ariel.

Green sea turtles are the main focus of study at Caraplace, which can house up to 48 turtle hatchlings in near-natural conditions. Pristine sea water is shipped to the facility from the Australian Institute of Marine Science, 70 kms to the south. The turtles enjoy a diet of human-grade fish and vegetables, as well as fish pellets.

Opened last year, a new extension to Caraplace, known as the “Outer shell”, allows the turtles to flex their swimming skills in longer tanks, as well as sunbathe safely, beneath retractable shade sails.

Caring for the turtles is labour-intensive work, but there is no shortage of volunteers, many of whom are studying marine sciences at JCU. Three of these students are currently undertaking Masters research projects under Professor Ariel. Enriching the environment for Caraplace turtle residents is a primary goal.

“Their research questions include: ‘We are keeping these turtles in tanks, so how can we enrich their environment/entertain them? How can we interpret what is going on inside their heads?” she said.

The student research findings to date are illuminating. Turtles have colour vision. (Their favourite colour – not surprisingly – is blue.) They also have good memories. Trials have shown that turtles which have mastered a trick to obtain a food reward, at a young age, will immediately remember how to achieve the same result, when the puzzle is re-introduced to them eight months later.

There is also evidence that turtles have individual personalities.

“I didn’t think that reptiles had personalities, but they do,” observed Professor Ariel. “Some turtles are shy and will avoid a new device in the tank, whereas others are bold and will swim up to nudge or bite it. They have vastly different behavioural traits.”

Green turtles in Australian waters are currently under threat, mainly due to habitat degradation caused by pollution. A group of JCU students has established the Turtle Love and Conservation (TLC) Society, which visits schools to raise awareness of ways to reduce the toll of pollutants, particularly discarded, single-use plastic items, on turtle health.

Professor Ariel herself is mindful that her research into these charismatic “gentle giants” of the sea means a great deal to many, including Traditional Owners and Great Barrier Reef tourism operators, as well as general members of the public who just love turtles.

“I think that is one of the things I love about working with turtles. It is not a lonely field; so many people care, and are interested in our research,” she said.